So we can give you the best possible experience, we use cookies on our website. Carry on browsing if you are happy with this, or you can change your cookie settings at any time. Find out more about our cookies.

How energy efficient is my boiler?

As one of the biggest costs for householders in the UK, it is worth understanding how energy efficient your boiler is, and how much you could save if you replaced it with a new high efficiency model.

If your boiler was installed before 2005, the chances are it is an old standard efficiency boiler, rather than a high efficiency condensing model. This is because the Building Regulations changed in 2005, requiring all new boilers to be condensing, and therefore much more efficient than the old non-condensing boilers.

In April 2018, the Building Regulations changed again, requiring all new boilers to be at least ErP 92% efficient.

How much money can I save with a new boiler?

A new boiler can save you money on your fuel bills and make your home more energy efficient, because for every pound you spend on gas, very little is wasted on heat that is lost up the flue. In addition, since April 2018, legislation requires a room thermostat and timer to be installed with the boiler, and in addition for combi boilers one of the following extra measures has to be installed: flue gas heat recovery; smart control with automation and optimisation; weather compensation; or load compensation.

This table shows the approximate savings you can make if you replace an old inefficient boiler with a brand new, high efficiency model and the correct controls. More information can be found here.

The costs for replacing a boiler will vary, but a straightforward gas boiler replacement plus thermostatic radiator valves will typically cost about £2,300 excluding radiators.

Boiler efficiency ratings used to be calculated using a system called Seasonal Efficiency of Domestic Boilers in the UK, or SEDBUK for short. Boilers were measured for how efficient they were at converting fuel (gas and oil) into heat. SEDBUK ratings ranged from A-G and had an efficiency percentage, with G being the least efficient.

In 2015 this was replaced by the Energy related Products directive (ErP), which provides an efficiency percentage but rates products from A++ to G, with G being the least efficient. Boilers have to have an energy label like this, which is similar to those found on other white goods.

Use our simple tool to find the right Baxi boiler for you.

Find a Baxi installer near you for a free quote to install your new boiler. 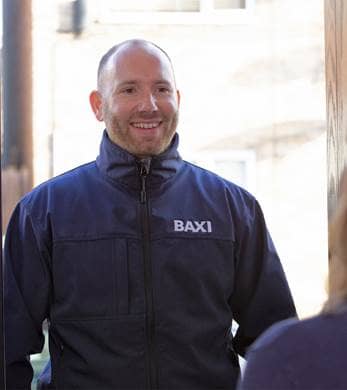